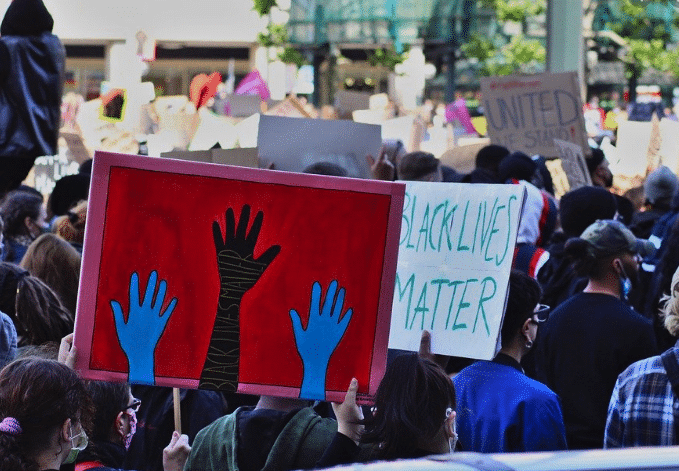 Last year, I was the keynote speaker for a statewide ELA conference and I was so hyped after rocking my morning session with the attendees. I hung out by my thinkLaw booth afterwards, chatting it up with English teachers, school leaders, and district curriculum heads about ways we partner to beef up critical thinking in the early elementary grades when I had a conversation that pierced me to the core.

After waiting for the crowd around me to disperse, an older white man walked up to my booth and saw the thinkLaw banner behind me. “thinkLaw…oh, that’s the critical thinking thing.” And here is how the rest of the conversation went:

Him: “I ended up running late this morning, but I keep hearing amazing things from my colleagues about the keynote. I’m so bummed that I missed it!”

Me (Colin Seale): “Man, I’m sorry you missed it. The feedback has been incredible!”

Him: “Like I said, I really wanted to attend. But I would love to hear more about what Colin Seale had to say.”

Me (Still, Colin Seale): “I’m sorry, I’m not understanding you. What are you asking for?”

Him: “Just wanted to see if Colin Seale was going to be around later for me to ask some questions about his work. Is he here? How can I get in touch with him?”

And as he was fumbling around Colin Seale’s booth for an organization Colin Seale started so he can grab one of Colin Seale’s business cards, he realized that at the corner of the booth there was an article called The Critical Thinker, profiling Colin’s work as the Founder and CEO of thinkLaw with a huge picture of Colin Seale. And he looked up at me, and he said, “Oh! You’re Colin Seale! Sorry about the confusion!”

Is that what you call it when you are hard-wired to not even consider the possibility that the Black man standing in front of you could have been the keynote speaker? This moment happened a year and a half ago, but every time I think of it, the shame and embarrassment of going from feeling on top of the world to feeling inherently “less than” punches me in the gut. The only thing that hurts me more than this marginalized feeling is the label we give to behaviors like this: implicit bias.

Implicit bias is the blanket term for the type of conduct associated with attitudes and actions based on those attitudes that stem from stereotypes. And this is often referred to as implicit bias because, supposedly, this conduct is not happening within the realm of our conscious knowledge.

I hate the term implicit bias and I think it needs to be retired, immediately.

How can “bias occurring outside of the realm of conscious knowledge” be blamed when a police officer decides to shoot Jacob Blake in his back 7 times as he was heading back into his vehicle where his children were? Was implicit bias some sort of hidden factor behind Derek Chauvin’s decision to press his knee against George Floyd’s neck for 8 minutes and 46 seconds? What about his three colleagues who stood there, indifferent to George Floyd’s pleas for life, reminders that he could not breath, and cries for his mother? Is this reckless disregard for human life some sort of subconscious, “I had no clue what I was doing,” phenomenon?

Beyond policing, how can implicit bias explain why so-called “ethnic-sounding names” get called in for interviews less than the same level of experience? In housing, do you really think implicit bias is the justification for why the appraised values for homes are lower when Black people have lived in those homes? What about the conduct of the man at the ELA conference who had such a hard time comprehending how I, as a Black man, could have been the person behind the keynote address everyone was talking about? HIs conduct was entirely consistent with the explicit bias seen so commonly in education that makes it so hard for folks to accept that children can be Black and brilliant at the same time. Can we look at the tremendously stubborn gifted gap and blame implicit bias in the face of a study by Vanderbilt University professors that found that even with identical test scores, white students were twice as likely as Black students to be selected for gifted programs?

This is raw, in-your-face, explicit bias. Why are we so afraid to call explicit bias out for what it is? I am not entirely sure of why the term implicit bias has become so popular, even by experts who fully understand how the ills of racism lead to explicit, in-your-face, acts of domestic terrorism, the pushing out of Black girls in schools, the demonization of immigrant families and children, and countless acts of soul-crushing experiences students of color face in our systems on a regular basis.

If I had to guess, I would presume that implicit bias just sounds better. It just feels a little bit safer. “I’m not a bad person, I just have implicit bias issues. Who doesn’t?” This cannot suffice. If we truly wish to engage in the honest, open, and self-reflective work needed to combat racism at an individual and systemic level, we must acknowledge that “implicit bias” is letting us off the hook.

Without a close and careful examination of how explicit bias plays out for you as an individual and for the systems you work in, believe in, and participate in, you are actually doing the real work. I will share a somewhat embarrassing, but honest story about my first year of teaching to explain why understanding explicit bias is so important.

One of my primary motivators for becoming a math teacher was to be a positive role model in the lives of young Black boys in the way that my middle school math teacher, Mr. McNeil, was to me. Although I had a positive motive, my results were far from positive. It turned out that when I checked my own data, I was, without doubt, explicitly biased against the very same Black boys who motivated me to teach to begin with. I was at least 3 times more likely to refer my Black boys out of class than any other group of students. But this was not just an issue of looking at my quantitative data.

I also paid attention to the very real ways I emotionally connected with this level of explicit bias. I thought about the way I felt my blood boil anytime a Black male middle school student did the same type of ridiculousness any middle school student did. I thought about how my past experiences, values, and worries contributed to my explicit bias. For me, there was this outrageous theory that the world was so harsh to Black men that I had to prepare them for this unfairly harsh world by being unfairly harsh. My explicit bias led to my shameful conduct of giving them tough love instead of regular ol’ “love” love.

Had I relegated those emotions to implicit bias, to “bias occurring outside of the realm of conscious knowledge,” I would not have that same sense of ownership. Our obsession with implicit bias is closely connected to our habit of demeaning our gut feelings as irrational. Gut feelings are entirely rational, because like my instinct to be unduly harsh to my Black boys, gut feelings are a part of your values, experiences, and education (both those lessons you are explicitly taught and the lessons you implicitly learn). Shifting towards a lens of explicit bias requires us to name our gut feelings, sit in them in that very moment, and vigorously question the continuance of the conduct motivated by this explicit bias.

If we cannot explicitly name how explicit bias impacts our conduct, racial justice will remain illusory. The time for retiring the phrase “implicit bias” as the excuse for deplorable, racist conduct is long overdue. What we should be asking ourselves instead is how are we explicitly biased and what are we going to do to change this?

thinkLaw’s Educational Equity Equation helps you to prioritize equity in your classroom by leveraging instruction rooted in critical thinking that will help your students to question the world around them and become agents of change. Click here to learn more. 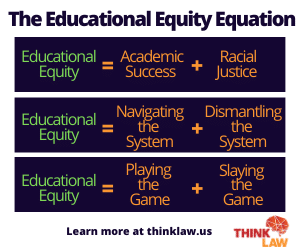 Master powerful, but practical strategies to help students unleash their passion and gifts with your copy of “Thinking Like a Lawyer: A Framework for Teaching Critical Thinking to All Students” today! Click here to get your copy.

Equity Over Hand Sanitizer: Racial Justice as the Focus for Reopening Schools in the COVID-19 Pandemic

Upcoming Webinar: Equity, Racial Justice, and Critical Thinking: Unpacking the “How” of Education Equity at the Classroom Level 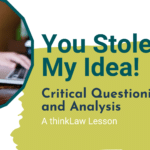